4th April 2018 – The International Somali Awards hosted its third annual gala event at a prestigious ceremony in London to showcase and celebrate Somali success, bringing together the most inspirational Somalis from the UK and all corners of the world.

After a seminal year for the Somali community this year’s theme was ‘Inspire to Innovate’ and focused on young and ambitious Somali entrepreneurs as well as recognising role models from the fields of business, social work, sports, education and entertainment.

Guests gathered for the event in the heart of Westminster and were joined by prominent VIPs, including foreign dignitaries, politicians, Government Ministers and well-known personalities such as President of the International Court Of Justice H.E Judge Abdulqawi Yusuf, State Representative for Minnesota Ilhan Omar, Ambassador Mohamed Affey from the UNHCR and Footballer Mukhtar Ali.

“I refuse lose my hope, to see Somalia rise in the community of nations” 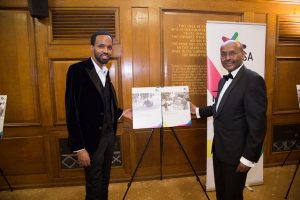 The event also remembered the victims of the Mogadishu attack last year with a special exhibition memorialising the victims of the atrocity and bespoke ‘NABA’ (meaning peace in Somali) enamel pins were handed out. During the ceremony the heroic first responders were commended for their selfless actions, mirroring the strength and resilience of the Somali people.

“The event was about recognising the outstanding contributions of the Somali community while acknowledging and paying our respect to the hundreds of innocent men, women and children who lost their lives during the Mogadishu attack. This is a crucial time for the Somali people and while we must celebrate our community’s success, now more than ever we must unite in defiance of hatred to demand peace in Somalia.”

“As a community we have made a huge impact on the international stage, yet we should always be striving to do more. I urge people to support the ATM in our ongoing mission to champion the Somali people. It is only through your help that we can make moments like tonight that celebrate the very best of Somalia to encourage and empower the next generation.”

The International Somali Awards is an event honouring the greatest achievements of the worldwide Somali community and promises to be one of the most important events of its kind ever staged. An innovative, unique and prestigious event, The ISA pays tribute to inspiring Somali success stories from all walks of life, and recognises inspirational role models from the fields of business, social work, sports, education and entertainment.